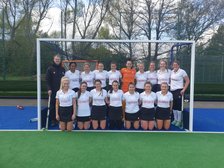 Come support the Ladies in their Cup Final

Wishing our Ladies 1st XI all the best in the finals!!

Our Ladies 1st Team have had a fantastic second half of the 2021/22 season ending with their final match in the England Hockey Tier 1 Cup Championships on Saturday the 21st May vs Beeston.
Due to the restructure of the Premier League with the half season split of top six and bottom five, Buckingham Ladies faced Beeston only once and away in the first half of the season. In the past the two teams have been fairly equally matched so this promises to be a superb display of hockey as both teams battle it out for the Championship Title.

For those wishing to support them in the Cup Final, tickets can be bought via England Hockey
https://hockey.seetickets.com/tour/the-fih-pro-league

The Cup Final takes place after the England Mens & Ladies Pro League Matches at Lee Valley. Tickets purchased for the Pro League to include Cup Final.